by brother_david » Wed Aug 05, 2020 11:07 am
Reply with quote
Im working on getting skybox like clouds (without skybox due to TOD) by using Cloud Layer. A thing that occurs is that i cant seem to get the clouds visible towards the horizon, theres always this blue area in between the clouds and the ground. Anyone know how to adjust/remove that? Not connected to fog as far as ive tested.

Using the image from the documenation: 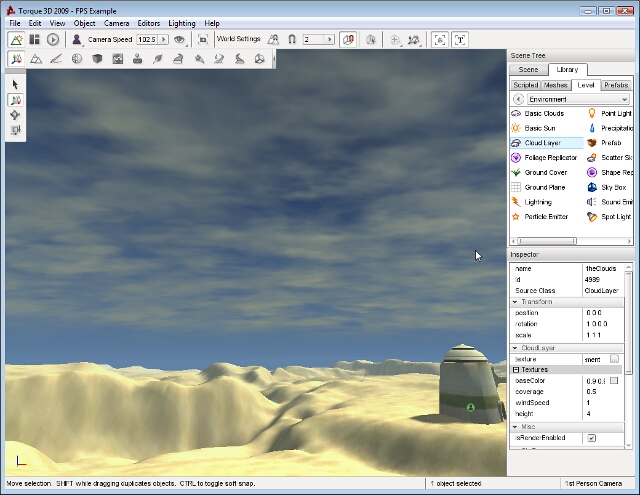 by Duion » Wed Aug 05, 2020 2:27 pm
Reply with quote
Look for fog settings in "theLevelInfo", it is most likely the fog that accumulates in the distance and it has a specific atmosphere height, that is where the clouds stop and the fog begins.

Edit: I overread that you already said not related to fog, in that case my next guess would be view distance, check that in theLevelInfo.
http://duion.com
I don't want no Unity, I just want my Torque 3D.

Look for fog settings in "theLevelInfo", it is most likely the fog that accumulates in the distance and it has a specific atmosphere height, that is where the clouds stop and the fog begins.

Edit: I overread that you already said not related to fog, in that case my next guess would be view distance, check that in theLevelInfo.

Thanks for your answer! Tested both suggestions and they had no effect but if i increase exposure for the clouds they become stronger/more visible towards the horizon (obviously

Another thing i was thinking about; When cloud layer height is increased it seems the stretch it from the horizon. Is there a way to effect/move the clouds 'horizon' height without changing cloud layer height?

by Duion » Thu Aug 06, 2020 9:25 am
Reply with quote
Did you try the other clouds? They should behave different and go all the way to the horizon. What you are using is a method that overlays normal maps to generate the clouds, maybe that has something to do why they do not go all the way to the horizon, while the other clouds are just an image that scrolls.

But I don't really understand your problem, I use all methods of sky/clouds in my levels and the basic clouds and skybox go all the way to the horizon and the other clouds do not go all the way to the horizon, but fade out in the distance, it does not look that wrong to me and if you have some mountains etc in the distance you won't see the empty area at all.
http://duion.com
I don't want no Unity, I just want my Torque 3D.

Not really a problem with T3D but rather a problem im creating since i think im trying to do something its not meant to do, which is something you and i talked about for like a year ago. That is static cloud layer clouds for the purpose of getting clouds in the horizon that are effected by TOD. Didnt have time to dive into that then but by a coincidence that specific, unorthodox, way of making horizon clouds popped up in BeamNG some months after we discussed it and now im trying to improve the look of those.

Ive managed to figure out a way to get pictures of clouds, typically used for skyboxes, to look similar when used in cloud layers thus having them react to TOD/sky changes. Im really in a beta stage of this but what i do is i recolor the cloud texture only using normal map colors (blue/purpleish, redish, greenish) using a special tool in an online photo editor. If i was to use a common normal map tool i wouldnt get the good blending of the cloud shapes i now get.

Just figured out one way to solve the less visible clouds. Breaking it up in portions so that the clouds closest to the horizon is one texture, with higher exposure setting. Im already planning what benefits would come from using several textures for this but this would definitely be one.

The horizon clouds are meant to be one part of the sky clouds, the other is conventinal cloud layer clouds that move across the screen. One idea i did have was to have the horizon clouds rotate around the level, to bring some more dynamic to them, but im not that down with the codes to add that posibility myself. Not sure one would play each level long enough to even notice or care if they move or are static.

by Nils » Tue Aug 11, 2020 8:06 am
Reply with quote
If you want you can experiment with changing the shape size & height of the basic clouds layer.

If you want you can experiment with changing the shape size & height of the basic clouds layer.

Thank you very much, i will look at it. Always trying to find ways to 'improve' the look of lighting and sky. I did use basic clouds instead of a skybox a while ago, thats how all this horizon clouds thing started. Ive never had great success with skybox so instead i took a wide image of a sky and made it circular and transparent where the blue sky was. Then i wanted to have it effected by the sun and here we are lol. Been experimenting alot with different light settings, lately ive boosted Brightness to achieve a brighter late time of day. The overall light ive adjusted using the scale gradients and i like this way alot! Dont know why i havent used it before. Link to my Beamng post btw, if it would interest you:


You wouldnt happen to be a swede? Very swedish name