JeffR
You have to advertise your patreon on the frontpage or so, this way nobody will see it.
@All others
You should consider donating a bit, even if its just a symbolic amount, since Jeff is basically our main developer and repo maintainer.

by Julius
Awesome updates, can't wait for 4.0 to arrive

Thanks for posting about the Patreon page as well, definitely high on the list of creators to support!

by HeadClot
Going to back JeffR Patreon soon.

by JeffR
Hey everyone!

It's that time of month agaiiiiin.

Firstly: don't pick up any seasonal sicknesses. I had one at the beginning of last week, and while I got better in time for thanksgiving, it still sucked to largely be lying around feeling gross for a few days. Definitely hampers productivity!

But I'm obviously better now, so we get to talk about all the cool crap that's been getting worked on!

First and foremost, I sat down and spent some time on a refactor of the Menubars and popup menus. It's PR'd and while I've spotted a few minor issues I need to add to the PR before I get it merged in, largely it's WILDLY superior to the old stuff. This is in part due to how much baggage was involved with it. See, back in the old T3D days when it was Windows-only, it hooked the menubar and popup menus through the actual Windows platform stuff. That was neat and all, but obviously when Linux and then Mac support cam along, it meant that that was no longer acceptable.

So, what we did was implement a "SDL Platform" version, that wrappered alongside the windows platform-specific stuff but in a generic way. This basically became the standard and the only thing we used, but it still meant there was all that old crap lying around. So this meant lots of weird stuff was happening, like the popup menus associated to menubar entries were actually completely distinct objects and classes and rendered differently to popup menus that happened when you right-clicked on stuff.
That meant things like submenus on right-click popups didn't work(because it wasn't implemented there) along with a litany of duplicated, redundant, spaghettified codestuffs.

So I went in there with a machete and cut out i believe it was 8 unneeded files, and collapsed all the functionality into one common popup menu class, the menubar class which tracks popup menus related to it, and the actual rendering of said popups. It's all way more standard and cleaner now.

Also helped Jeff H. get the Torquescript interpreter wrapped up with the testing and fixes and seems pretty stable now, so that's been PR'd as well.

Beyond that, got most of the Custom Shader Feature implement wrapped up. Still a few bits and bobs to sort out, but the core implement works. For example: 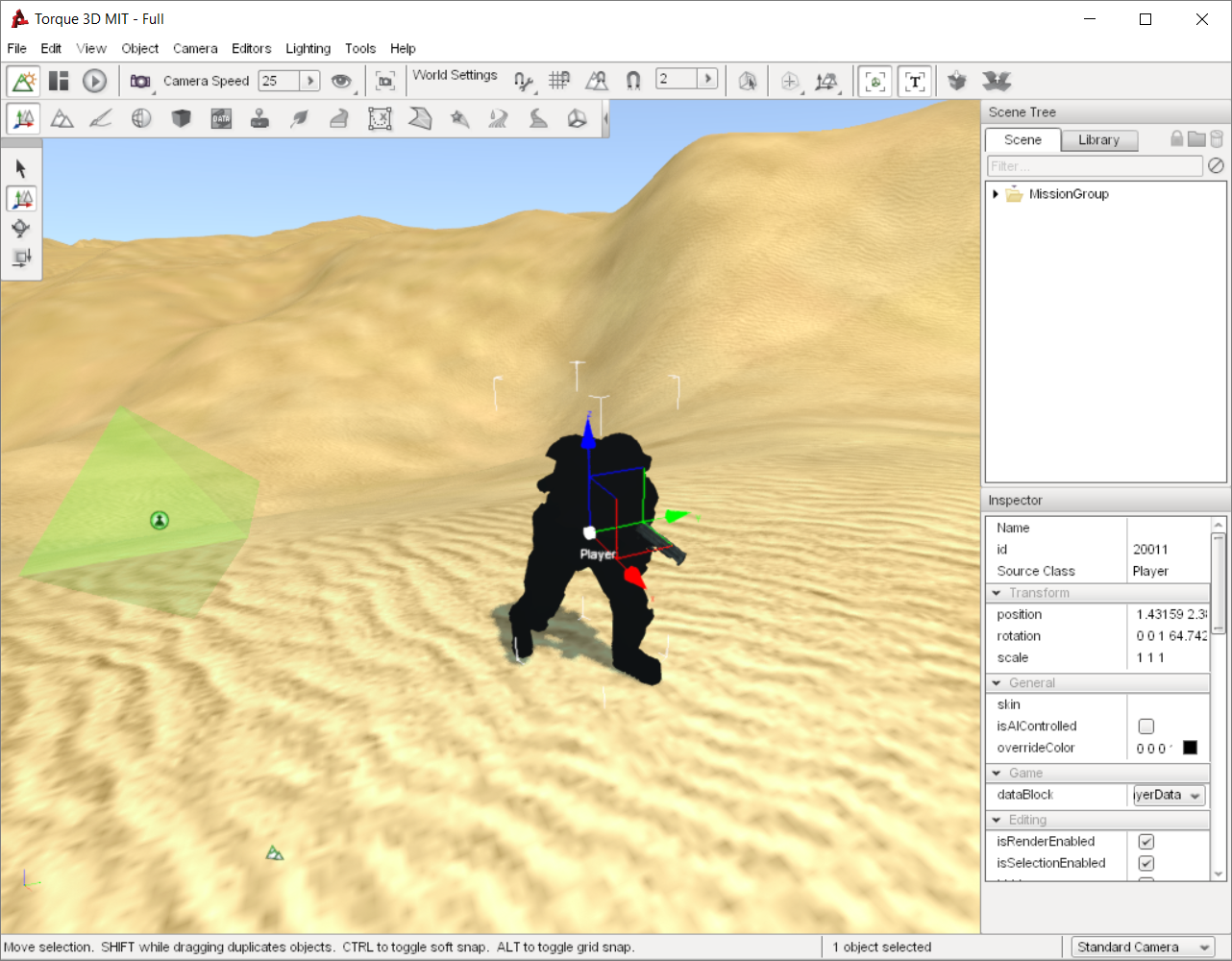 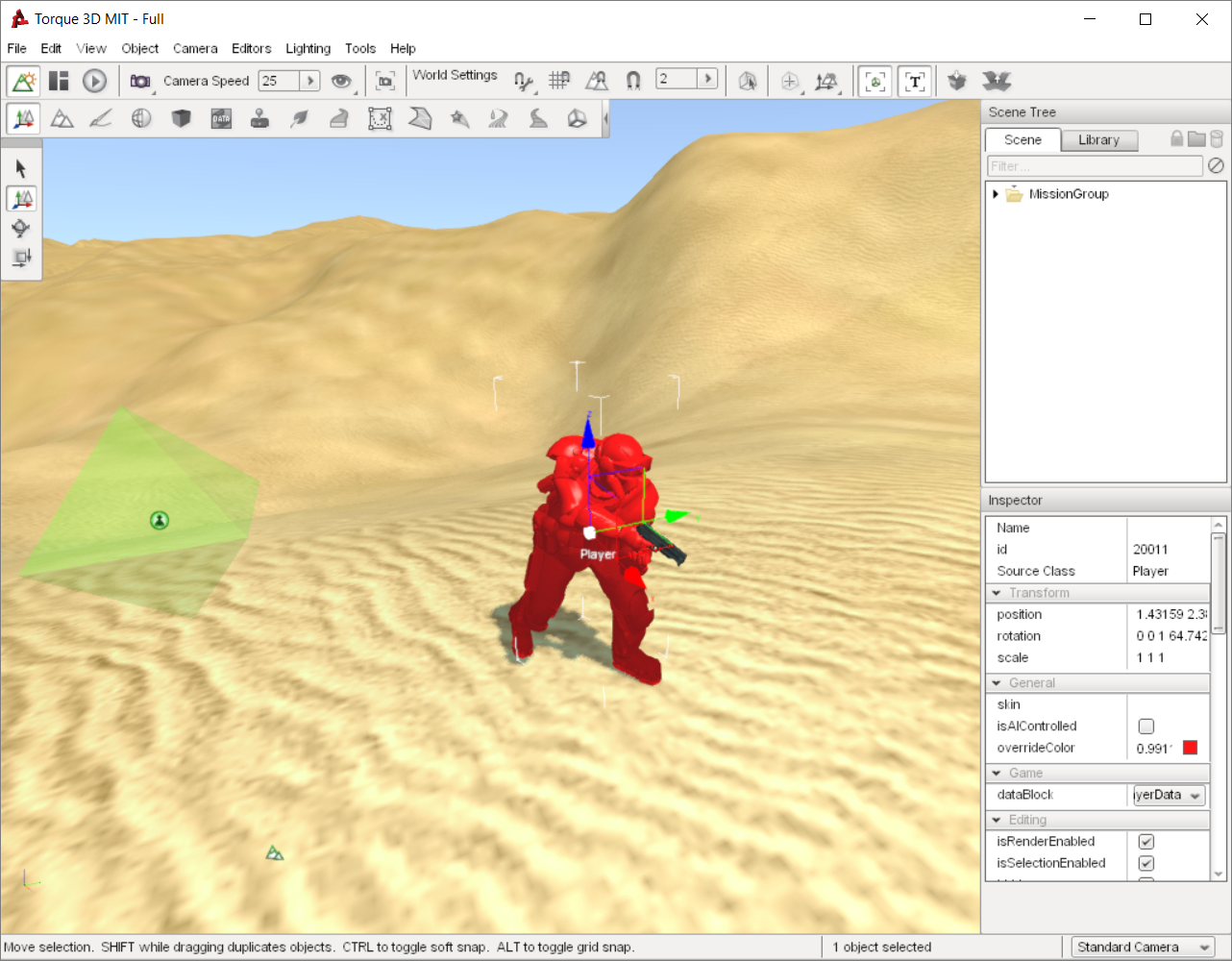 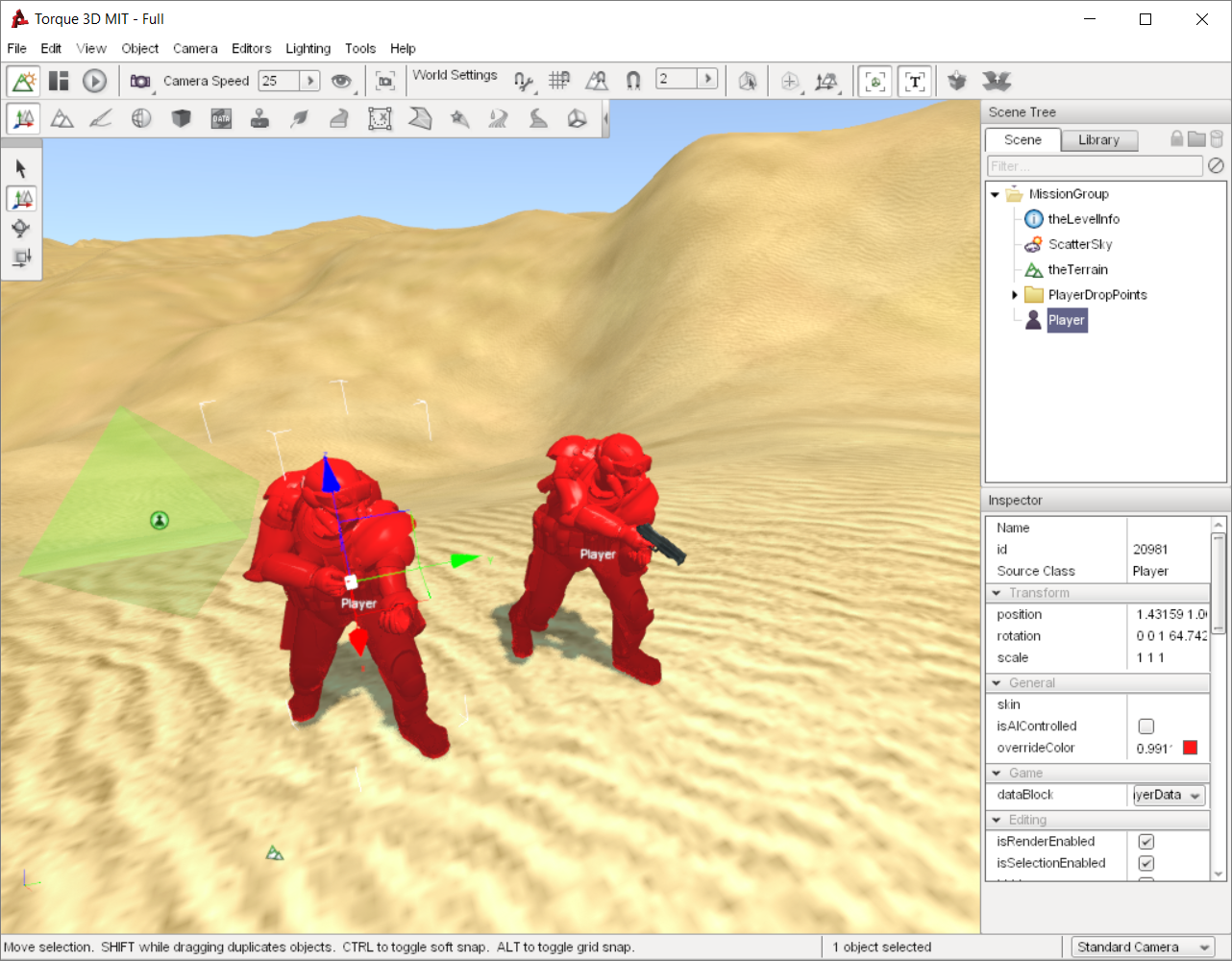 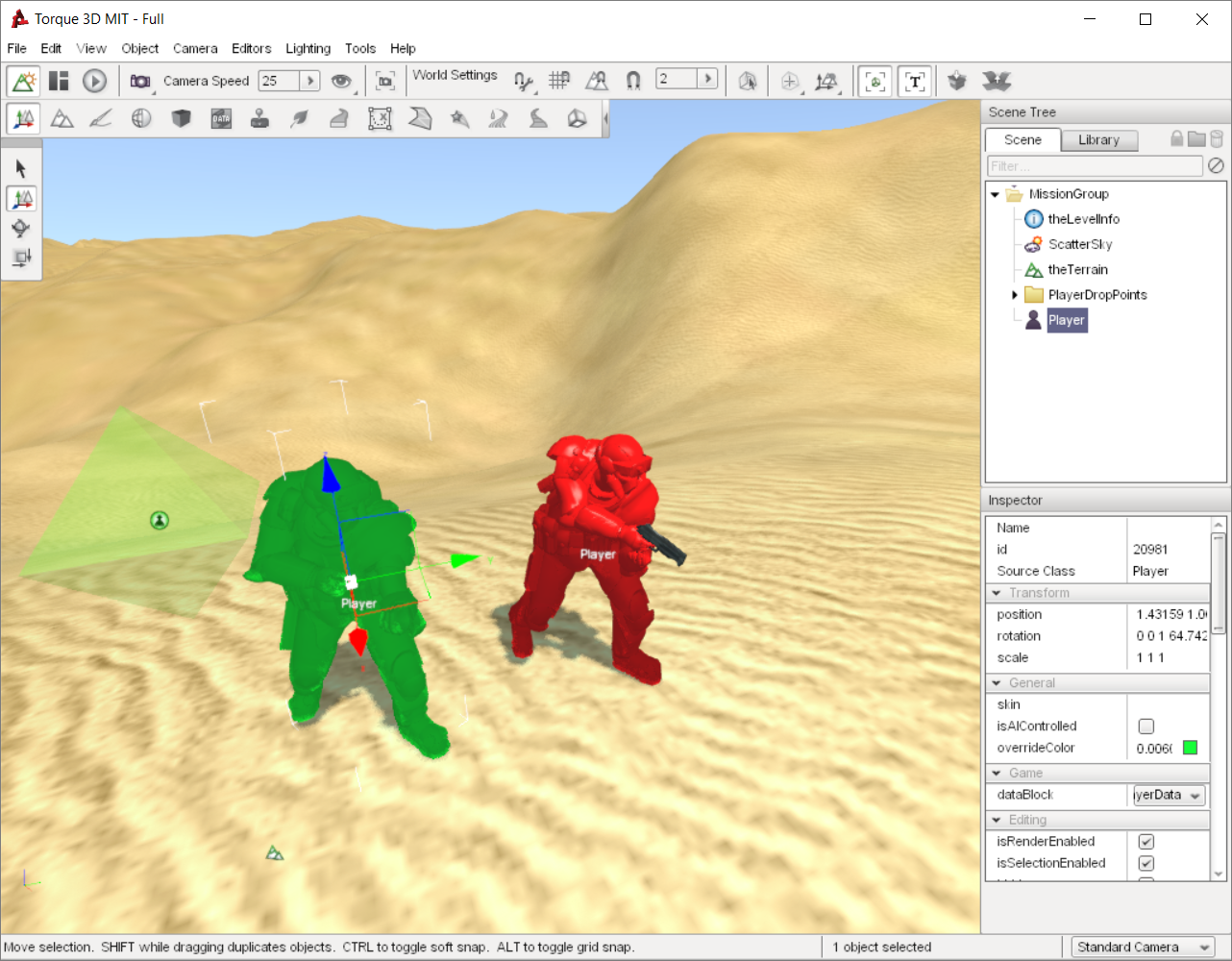 That uses our prior Flat Color Feature example, with a field added to shapebase objects to pass along an override color into the shader. As you can see, the passed in color not only overrides as expected, but operates nicely on a per-instance basis.

The remaining work on that basically is getting non-shared material instances for static shapes - in an effort to optimize memory usage, the engine current makes it so TSStatics never have unique instances of their materials. They always share, meaning the per-instance override doesn't work. As well as implementing the connector logic to bridge data between vertex shaders and pixel shaders.

Once that's done, I've already promised @ Skipper to help build out an example case where you can control the invisibility amount via a CSF, allowing you to fade the shape out with a smooth alpha value instead of the dither effect. We figured that'd be a pretty slick example of interesting, special behavior you can get working with that sort of thing.

Beyond that, I've done more work on the Asset Browser, trying to get the basic implementation of it wrapped up and ready for the prime-time usage.

You've seen me do the drag-and-drop import before, but now we can do interesting stuff like re-importing, finding missing files and the like. I have a video where I show that off and explain it a bit better:

And then I had a followup when I got asset dependencies working so that materials correctly refresh when the re-import happens:


The todo on the asset browser for the CORE implementation is getting shape animations importing properly and hooking to shapes as dependencies(that way if the animations change, the shapes will auto-reload with those changes, as well as always loading the animation assets before the shape itself, so there's no load-order/file finding confusion) as well as some general management logic for tracking inter-module dependencies and the like.
After that, I'm going to have the various game classes accept assets alongside straight file paths, so either work as a bridging of behaviors.

There's a fairly long list of additional behaviors the AB will do, but the above is what's considered minimum.

Another experiment I did related to a discussion we had pertaining originally to post effects load order and how to manage that better(because right now, it's pretty well a mess), but then it compounded into a method to much better control and understand the general 'flow' of the rendering.

You see, the way T3D renders right now is that the main thread trips a update event signal, which the Canvas is set to. When that signal triggers, the Canvas handles the event, and triggers a refresh.
This goes and updates all it's child controls, which generally includes either a guiTSControl or guiEditTSCtrl. These, during their respective render functions, do a bunch of logic to actually set up and initiate the rendering of the scene, then call up to their parent, which does more of the work, and eventually finally ending out into the scene manager where the objects are finally told to render, which passes them into the render bins, where we process them. Then we do our rendering to the GBuffer targets, after which we do our lighting and post effects, Finally resolving the image back to the main display target the GUI control displays.

If you've ever bothered trying to poke through the actual path the renderer takes, it's pretty well a giant spaghetti western with fewer hats and horses. I dealt with it when trying to get the reflection probes to bake and I did some streamlining work to collapse all that logic into a single RenderFrame() function that triggers the majority of the work and then outputs to a given Render Target.

So the idea became thus: Make the rendering camera-based. Obviously a scene can't render without a camera anyways, so instead of doing your whole render setup and getting the camera somwhere in the middle of your whole render-mess. you have the canvas's render call tell the cameras to render from their perspective. The cameras do the render work in a much more localized, streamlined way, and output that result to a render target.
The GUI control that actually displays will ONLY display the resulting render target.

This comes with a TON of design advantages, which I'll enumerate below, but first, a nifty video of a very hacky initial pass at this setup:

Now, obviously it's not rendering right. There's a good number of bits and bobs not fully implemented there, so more work obviously needs to be done, but that video already displays something really cool that this approach enables: Resolution scaling.

See, rendering as-is is FULLY based on the set resolution of the canvas. When you change the options for the display resolution you're dictating the canvas size. While it can be stretched to fill the screen or whatnot, ultimately the display resolution is limited to the capabilities of the monitor. If you've got a 1080 monitor, you can't set the window to be 4k.
That sucks for a number of reasons, but there's other things to it too.

What happens with the new camera-based render path, though is because we output to a floating render target the GUI simply dispays, it's completely detached from whatever the window size is.As you can see in the video, though the window is mostly my full screen(just shy of 1080 resolution), I can then change the resolution scaling the camera's render target outputs as, allowing me to scale down, for a lower display resolution, which runs dramatically faster, up to 4 times that resolution - 4k.
I even accidentally set it to 8k once, but that tanked my framerate into slideshow land, haha.

One of the novel advancements newer games have been supporting is 'Resolution Scaling' as a preference setting. This lets the user control the actual processed number of pixels, distinct from the actual window/monitor resolution, usually anywhere between 50% to 200% of the window resolution. So, if you're having problems running the game, you can lower the resolution scaling without shrinking the window, and you'll get better performance. If you blow way past the performance requirements, you can sample above the window size, causing super-sampling, which actually often better reduces aliasing and blurriness of the scene without needing to resort to Anti-Aliasing effects and the like.

Further, from there, some games have implemented Dynamic Resolution Scaling - an option where, if enabled, the game tracks the per-frame performance and if it falls below a certain mark, it will automatically reduce the resolution scaling slightly in the background for you, which improves performance. This is a subtle way to get a performance increase to hit a framerate target in especially complex scenes. Then when the complexity dials back - say your nuke finishes exploding - the frames are taking less time, so it scales back up. It can even be set to super sample in particularly cheap scenes so things look nice if not much is going on.

So that's something we can very easily support with the new camera-based render path setup which is great for performance AND looking even better. But that's not all it'll allow:
So yeah, that'll be a preeeetty big deal. I'll be sure to keep everyone posted about how that's going, because honestly, it's pretty freaking cool

I know for a fact there's some other things that were worked on, but it's already 4am and I'm starting to have trouble, haha, so I'll likely expand upon this post in the morning.

Hopefully all of you had a wonderful Thanksgiving, or at least a most excellent Thursday

That's been my failing unfortunately ...

Tell us about it

Smart idea with the resolution scaling, right now if you want a fullscreen resolution smaller than your monitor (for fps-quality trade-off) the GPU/Windows has to change the whole desktop/monitor - cue black flashing screen for 2 seconds as it rescales.

That's been my failing unfortunately ...

Spent like 3 weeks lying down and at least 3 weeks more to recover. I do not recommend people getting the pneumonia. Bad for yaaa health.

by chriscalef
@ JeffR Nothing to say here except

Keep up the good work, and thank you SO MUCH for all of your efforts!

by Julius
Will the camera based render path have an effect on VR support? Sounds to me like that would also be easier, but what about the existing support?

by JeffR
Julius, yeah, it should make it appreciably easier. In addition to that, I've already got a plan for VRCameraComponent and VRControllerComponents to make it even easier to just drop everything in and go with VR setup.

Is there some aspect of the current functionality that's not working for you? I know controllers aren't working yet, though the component above will resolve that.

Was just wondering in general.
All times are UTC+02:00
Page 18 of 46
Powered by phpBB® Forum Software © phpBB Limited
https://www.phpbb.com/