This forum is for tracking and working on active issues that need to be resolved, as well as testing Pull Requests that are waiting to be integrated into Torque 3D.
51 posts Page 2 of 6
Topic locked

FIXED 2) If I choose "Join Server" I can't go back to the main menu.

3) The forest editor don't work. Because is base template will not have brushes?? this is a issue?

FIXED Options/Screen Brightness/ the defaults button doesn't work, should move to the middle I suppose.

FIXED In the menu if I press F11 show me two levels "blank" and "Empty". With blank level t3d don't start and freeze in the loading screen.

FIXED In the main menu F10 don't work. I need to press F10 two times to work. (See the attach)

2) Camera setting the same issue with the defaults button. Don't save the new value.

But if I restart t3d all values goes to the defaults values. Don't save any change.

3) Black Screen. Do the following in the exact order. (See the attach)

And the Scene tree show this: 6) I think in the menu the GuiButtonCtrl needs to be shorter. (This is a issue)

Look the highlight the button from far away... some time I click it by mistake. I will note, that this template is the beginning of Basic Lighting being removed, pertaining to #7, so you can ignore the toggling of that option causing issues. You'll note the lighting options have a 'no shadows' setting now. This is still the full deferred, only we toggle off the shadows, which really are the big performance drain.

It makes more sense to full-in on one lighting system and just make it as efficient as physically possible than have a vestigial light system that is barely used and just clunks up the entire codebase, so it'll be getting peeled out going forward.

by oXYnary » Mon Dec 28, 2015 4:33 am
Az asked for feedback for the Art directory. I conferred with someone on PC, this is at least how we would see more organization. The biggest one is the shapes directory, as paraphrasing "wtf is that supposed to be for?"

If gui is supposed to have its own main subsection anyways, I would move gui items out entirely even if images. Don't have any material or images in the main art directory, put under templates along with grids. Also didn't see a sound section in datablock (don't put under art).

Thanks for the feedback, man!

Yeah, the art folder is going to be the most onerous to get a good, general layout on for sure.

I think it makes sense for art to be in the art folder in regards to GUI stuffs, just for consolidation, but yeah, the gui files themselves could be folded into the scripts/gui directory.

What are you figuring would go into the vfx folder?

And I take it 'Templates' would hold stuff like the grids images and the black/gray/white images and the like?
Would it make more sense to have that be 'Misc' instead?

Please look how I organized and tell me if will be used that way.

I will use this

for issues pending and this

if it not an issue or may be will be remove from template, and this

What are you figuring would go into the vfx folder?

And I take it 'Templates' would hold stuff like the grids images and the black/gray/white images and the like?
Would it make more sense to have that be 'Misc' instead?

vfx = particles. I guess fx would work as well.

templates, yes, as you mentioned, thats exactly what it holds. Misc works, but is it descriptive enough to a new user?

The reason I figured for 'misc' instead, is it'd also work as a place to stick the white/gray/black, etc images and othe rmisc utility images.

Forest issue should be fixed. Screenbrightness default fixed. Started fixing audio/camera, but those are a little more involved because they don't have a simple autodetect function to call. Almost got those sorted though.

I'm seeing the values save when changed, so double-check that. If it still doesn't stick(make sure to press the OK button, not cancel or hit esc) then it may be a permissions thing with it not wanting to save the prefs file to the game's dir.

Az did provide a lovely function written up by Steve that gets the prefs path from the OS' user directory rather than the game dir, which could be in a protected path. It's not used yet, but the function is in there now and I'll be shifting the template to use it in the next update.

Also per Az's idea, the logo on the main menu will, when clicked, pop open the forums here.

The warning/faileds should be corrected for the level load now as well, this includes the testSound/cheetah_engine errors.

Fixed the 'need to press twice' for the editors buttons, and also for simplicity changed the world editor to open to the default blank level rather than trying to crack open the choose level menu in order to reduce hardcoding. If you're already IN a level, it'll just stay in that one.

Adjusted the size of the main menu buttons to fix the weird overlap. Uses a dynamic control array now.

Ok, so, speaking of directory layouts, one final thing I wanted to bring up here for us to suss out before we lock this in properly. Namely, how to handle drop-in packages, such as art, gameplay kits, etc.

As-is, the current setup is better, as it should just be a matter of dropping the files in place and exec'ing them, rather than needing to worry about package overrides and the like, but it doesn't really handle overriden files that cleanly.

For an example case, say you have the base template, and grab a FPS starter kit, which has it's own art, levels, and menus. The art and levels aren't really a big problem, but the menus would likely include a main menu in place of the default one, as well as the playGUI and all that.

Replacing existing files isn't terrible, though a bit less than ideal. So the other approach that occured to me is utilize the modules approach more thouroughly. Figured I'd bring it up here, get peoples opinions on if it's worth it, or stick with the setup as it is now.

Basically, adjust the layout of the data directory to package like content into a module, such as UI stuffs, gameplay code and art, specialied client/server/level loading code, etc. This would make it a lot easier to take a art package or starter kit, and just drop it in and maybe have to add a little bit of glue-code, but it'd prevent the need of overriding files, and in the unfortunate event of deciding you don't like the package, having to manually rollback/uninstall the files associated with it and replacing them with the old ones.

To that end, the layout would look something like this with this approach: 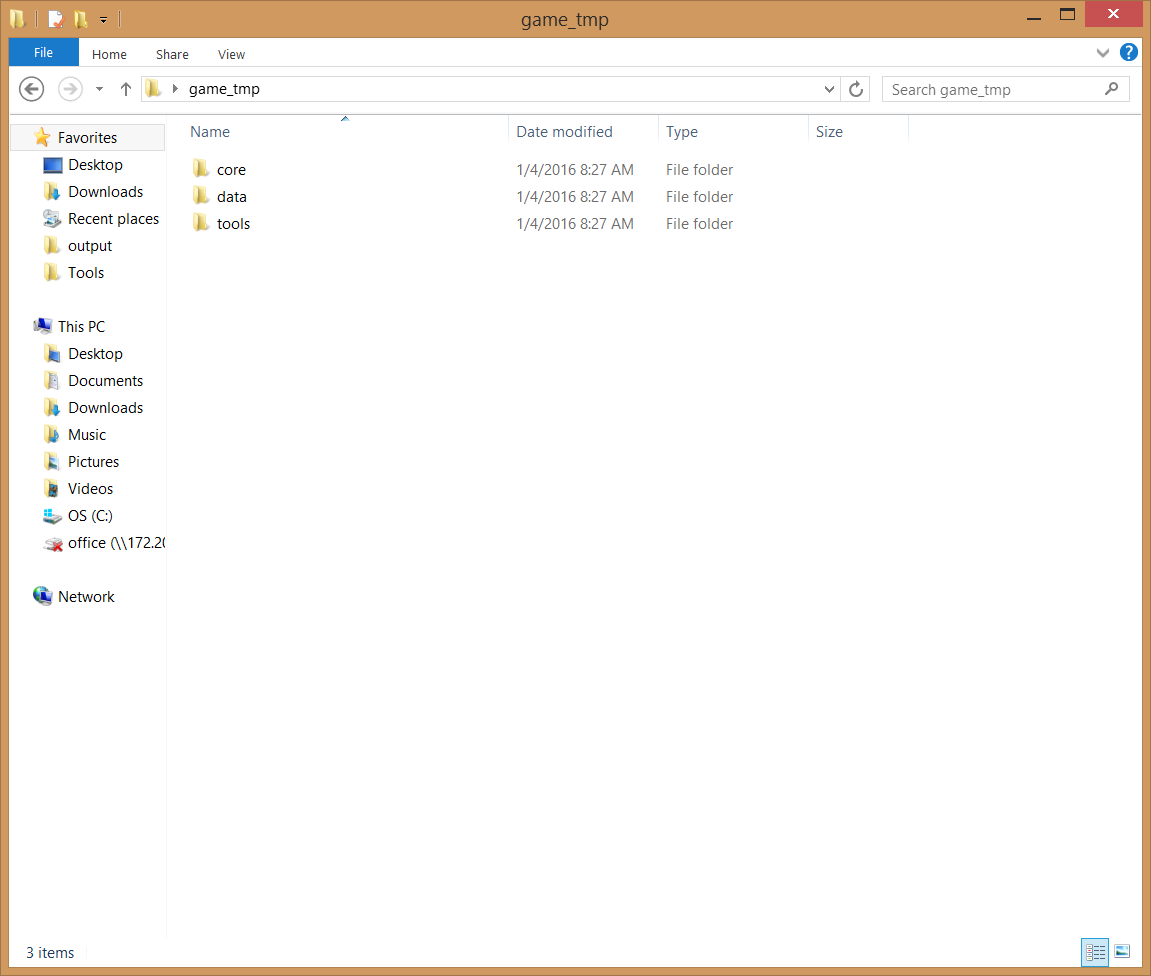 The data directory would see a change though, with the stuff inside being compartmentalized to what package is to what 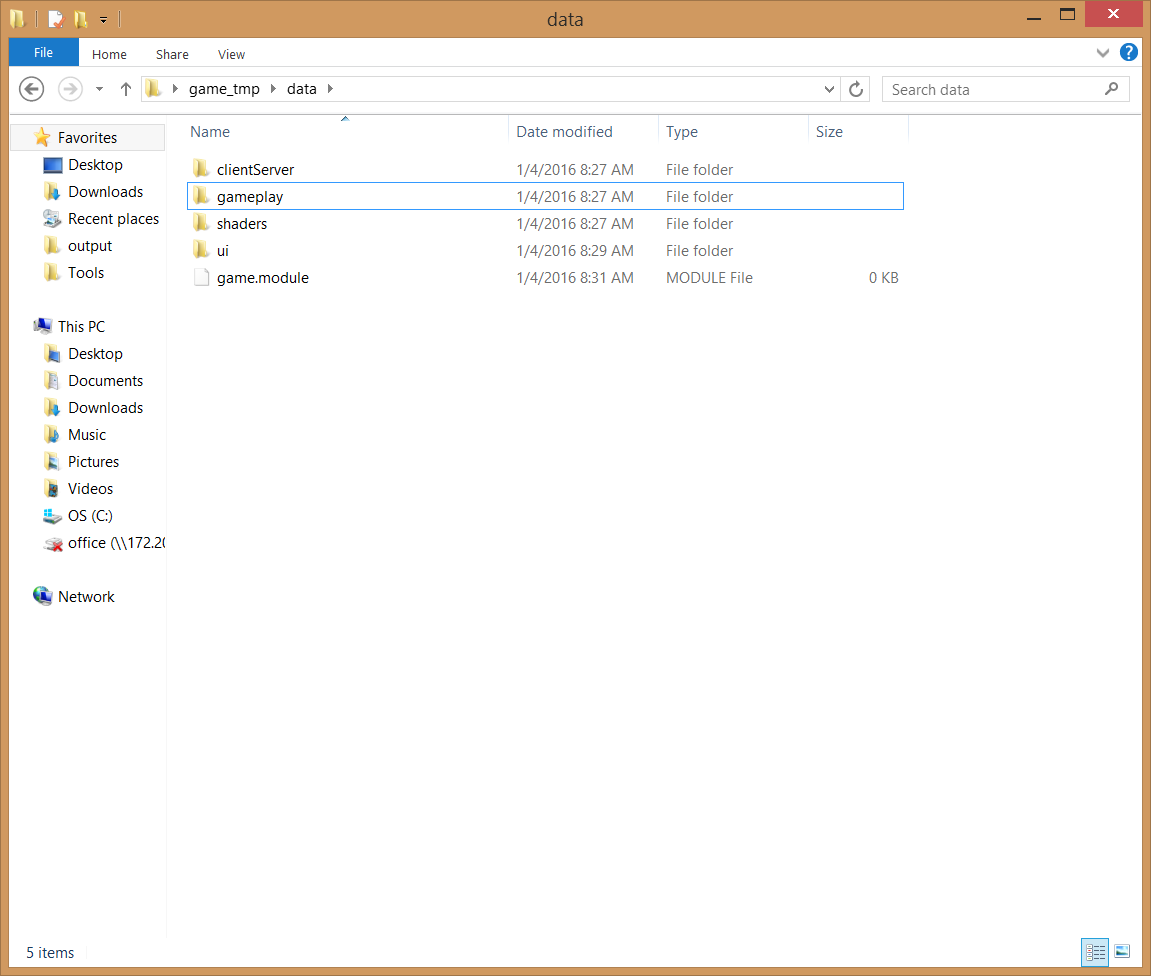 Inside one of the package folders, it'd have a module file which is automagically indexed by the module system and the script file the module file calls to for it's create/destroy methods. This would mean that the installation of a art or gameplay kit package would be as simple as dropping the package's folder into the data directory and it's installed, you'd just need to handle the interop gluecode yourself(such as your gameplay code calling the UIs).

So, thoughts/opinions on this sort of layout? It seems like it'd make using packages/kits a lot easier, but I'll admit the layout like this feels a bit more "loose". It'd also be really convenient for mods for games that care about that sort of thing, as a mod could just have a package directory and poof, it's a thing.

So yeah, lemme know what you guys think about doing this layout, or if you've got an even better idea how to handle package/kits usage. Or just think the whole idea sucks dick and stick with what's there in the new template now. Once we figure on this, I'll lock in the directory layout and we'll just need to focus on bugfixing and handling the last little polish issues.