That's pretty much *exactly* what I was looking at doing, yep.

Though the plan was to have a tree view for easier module management as well. The R&D test pass ended out with something like this: 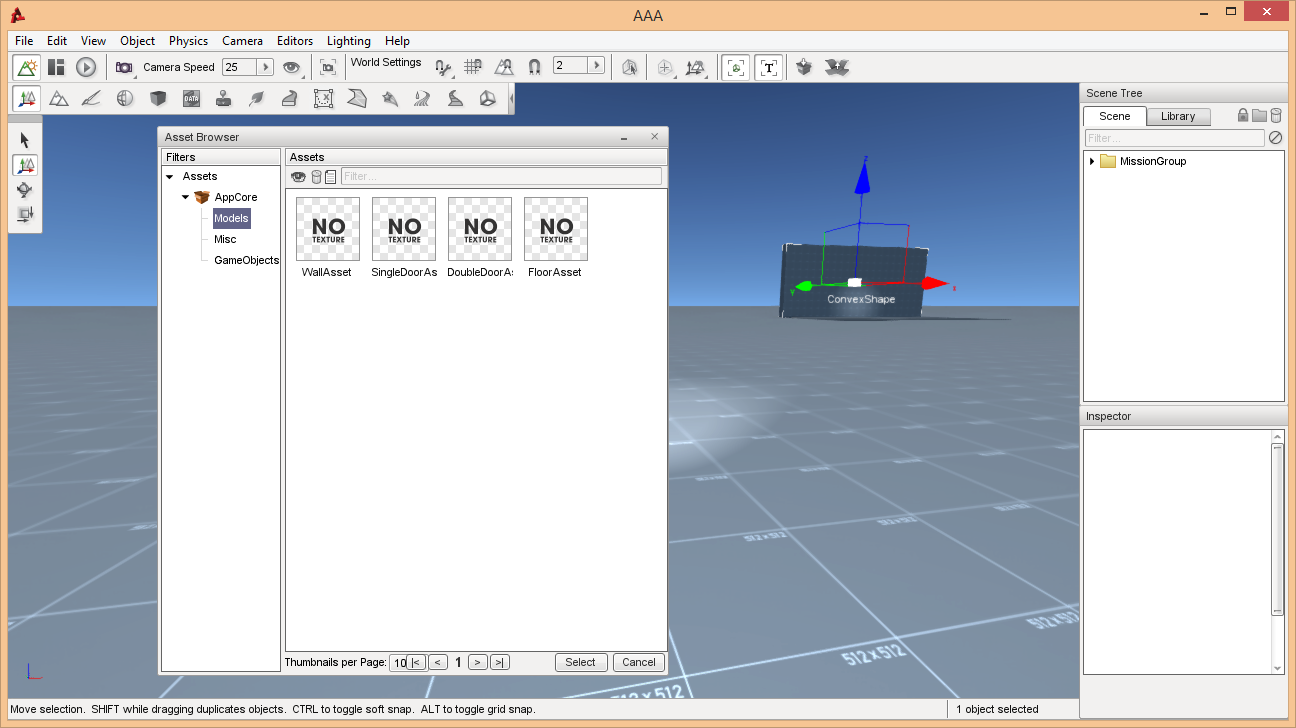 Obviously not truely functional, but it proved the basic concept well enough. With it having the tree view of the modules and THEN broken down by asset type, it would make it easier to do the 'move an asset to a new module' by simply drag-n-dropping on the module it needs to move to, etc.

It'd also have the search and tag filtration stuff like what you've got there(the eye button would bring a pop-up for filtration of types and tags).

by flysouth » Wed Jun 01, 2016 12:02 am
Reply with quote
As a complete noob to Torque3D I can see why it is not seen by many in a favourable light. I wanted to do what I thought should be simple... fit a turret to a vehicle. Well I managed to get it to be on the vehicle but not managed to get it to rotate. When the vehicle drives the turret jitters like it is not in sync with vehicle. After hours of searching I found a 2 year old post dealing with this and issue but it still seems to be an issue in the current version.
So it is great to hear about the new stuff in 3.9 but is all of the 'old stuff' working correctly? There seem to be many posts detailing all sorts of code fixes required and many of them going back years, but most of the issues still exist in 3.8.
Is anyone actually ensuring that all these bugs get fixed or is it more important to get new stuff and people who want to use the engine must try and patch it?

There seem to be many posts detailing all sorts of code fixes required and many of them going back years, but most of the issues still exist in 3.8.
Is anyone actually ensuring that all these bugs get fixed or is it more important to get new stuff and people who want to use the engine must try and patch it?

Heh! Welcome to my life

This engine is a nightmare for artists, don't get me wrong I love it, but still a nightmare thought.
Hair problems
Torque Dark theme little changes

by Duion » Wed Jun 01, 2016 1:21 am
Reply with quote
I don't think it is a nightmare for artists, I found it one of the easiest engines from the artist standpoint, just build your stuff, drag and drop and done. The nightmare only starts if you want to code new features.
http://duion.com
I don't want no Unity, I just want my Torque 3D.

Importing from Blender (the ONLY tool you can use for free if you want to do decent models) equals to at least tree days of research, and still not quite right.
No multiple UV's supported.
Bugged animation tools.
Making LOD's manually is a pain in the ass for today standards.
If you want to lightmap don't even bother on using the editor for making your level since you have to lightmap in external tools.
Sketch tool is completely useless as it stands.
Good luck on making animated materials without coding skills.

And the list goes on and on... So believe me wen I say IT IS A NIGHTMARE.
Hair problems
Torque Dark theme little changes

by Duion » Wed Jun 01, 2016 10:59 am
Reply with quote
-Importing from blender is just pressing the button "export as DAE" and with other modeling tools it will not be easier.
-Multiple UV maps are supported, I used them.
-Animations works fine, animate in blender, export and set up the animations in Torque.
-Everyone has to make LOD by hand, there is no known tool that automates it all.
-Yes, lightmaps have to be made in blender, but you don't really need them and if so you can utilize the multiple UV map feature for it.
-Sketch tool is not completely useless, it is just bugged. There is also an updated version from JeffR that improves it a lot, no idea how far he is with it. There was also a guy that did a complete game in a game jam with the sketch tool.
-Animated materials work fine as well, you can just click the different animation methods in the material editor and they work.

So yes there are some problems here and there, but your statements are mostly false.
http://duion.com
I don't want no Unity, I just want my Torque 3D.

by flysouth » Wed Jun 01, 2016 11:13 am
Reply with quote
My skills are mostly in embedded systems using C and IS project management.
Due to the various versions of Torque it is very difficult when searching for help, to know what has been fixed in the current version, what tutorials will work
and what features exist and can be expected to work correctly.
As new user of T3D I would like to make the following comments that might be of some help going forward. Some of this might be 'common' knowledge to the
experienced Torque users, if so please just accept it, as mentioned already I am a T3D noob.

In no particular order...
Okay this is my 2 cents worth at the moment ... hey I am new .. only tried making a tank so far. Feel free to add to this list.

flysouth
There is only a small number of people working on the engine and they do it voluntarily, so there are not really people working full time on documenting things etc so maybe you could offer your help.
Yes, other engines often have examples like a tank with a turret, but if you just drag and drop an already build model with already build code into your project, did you really achieve anything? And it is not that common to have working examples of anything in the engine, often you need to buy it as an addon or from asset stores. I know for example of cry engine having an example tank with turret in the game, you can just drag and drop it, very simple, but if you want to reconstruct how it has been build it will take you a while as well.
http://duion.com
I don't want no Unity, I just want my Torque 3D.

by flysouth » Wed Jun 01, 2016 1:18 pm
Reply with quote
I have not looked at the way Cryengine works. I also understand that the people doing the coding are volunteers and I appreciate their effort.
I don't expect to drag and drop a tank, but I would expect that I should be able to put a working turret and tracks on a vehicle without having to change the engine code.
All my point is that adding new features is great but perhaps some of the more basic requirements should be fixed. Using the turret as an example... yes you can mount it,
okay at this moment I am not sure if it will rotate and change pitch.. I am still trying to get that figured out. But once it is mounted I would expect it to move in sync with the vehicle.
Unfortunately this does not appear to be the case and has not worked for at least 2 years. So surely it would make sense to fix it especially when people have already worked out what needs to be changed in the engine?
I dont expect the documents to give a working example of how to make a tank. But it would be nice if it showed how to mount a working turret to a vehicle.

Importing from Blender (the ONLY tool you can use for free if you want to do decent models) equals to at least tree days of research, and still not quite right.

please elaborate on points of confusion. either here, or in a focused thread.

As Duion said, at time of writing, lightmapping references a given modeles secondary UV channel. please elaborate on what all else you'd want to use them for.

Sketch tool is completely useless as it stands.

what additional or altered functionality would you like to see. Not sure what you mean there...


Due to the various versions of Torque it is very difficult when searching for help, to know what has been fixed in the current version, what tutorials will work
and what features exist and can be expected to work correctly.
In no particular order...

Yeah, when these forums were initially being cooked up, the initial plan was for it to be 4.0/rework focused before Stuff Happened. As is, the bound is generally around 3.7ish.
If it's just to jot down bug notes there's https://github.com/GarageGames/Torque3D/issues hashing out particulars to fix complex issues would be where the forums/irc/skype comes in. main root at time of writing for most assets (and the root being used for the entity/component work) will be Gamebase Class
note it's bipartite: someClassData for data shared across all object-instances, and someClass for the object-instance end. The Shapebase Class is a bit higher-order which in conjunction with shapebaseimage comprises the lions share of interactable content root. (player, vehicle, item, camera et-al being a subclass of shapebase at present, with, again plans to replace those based on Jeffs work https://github.com/GarageGames/Torque3D/pull/1615 that one's kindasorta what http://forums.torque3d.org/viewtopic.php?f=40&t=484 is about. or at least smaller chunks to digest.
elaborate?
Post a reply
41 posts Page 2 of 5
Return to “Announcements”